Original article by Trey at HVACtrainingShop.com

If you need a new fan motor for your HVAC system, the most important choice is whether to choose an ECM or a PSC motor.

The main difference between an ECM (newer technology) and a PSC motor, is that an ECM uses less energy to run. All ECMs can run at different speeds, whereas only some PSC motors have multiple speeds. This article will cover the differences between ECMs and PSC motors. Plus the efficiencies of ECMs and PSC motors, and whether an ECM is worth considering.

What is an ECM?

An ECM (Electronically Commutated Motor) is an electric motor that is controlled by a microprocessor. In an ECM, power is provided to the controller, and the controller operates the motor at a specific speed and/or torque.

For example, a constant airflow ECM will adjust its torque and speed output in order to maintain a constant amount of airflow. The controller provides control over torque, speed, and airflow to compensate for changes in the air resistance in the HVAC system.

What is a PSC motor?

PSC (Permanent Split Capacitor) motors have been around since the mid-1900s. The design of the PSC motor is relatively simple: It has run and start windings, and an external run capacitor.

This simplistic design limits this motor’s operational range and energy efficiency. Once installed, the only output adjustment that can be made to the motor is its speed (not all PSC motors are variable speed). Once a speed has been selected in a PSC motor, the amount of airflow produced cannot be controlled. The airflow produced by a PSC motor is at the mercy of air resistance in the HVAC system.

When a PSC fan motor is running, its airflow output is significantly affected by air resistance from things such as:

How To Tell If You Have An ECM 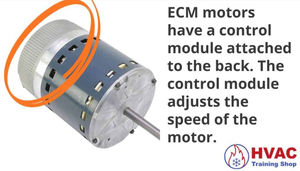 How to tell if you have a PSC motor 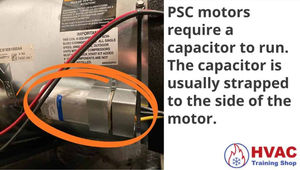 Benefits of using an ECM

The main benefit of using an ECM is reduced power consumption. One study found that the use of an ECM in an AHU (Air Handling Unit) consumed 23% less power during heating and 38% less power during cooling compared to a PSC motor.

While ECMs operate more efficiently, there are comfort benefits as well. Constant airflow ECMs are able to maintain a consistent airflow output regardless of air resistance in the HVAC system (up to a the motor’s maximum output). This means that an ECM is better at maintaining the rated cooling or heating output of an HVAC unit.

Is an ECM upgrade worth the cost?

With all the facts outlined, it’s easy to see how ECMs are superior to PSC motors in nearly every way. However, the increased cost of installing an ECM doesn’t always offset its energy savings.

One study found that the energy savings of using an ECM was not enough to offset the cost to retrofit the ECM.

In order for the retrofit of an ECM to justify its cost, some of these conditions should apply: